A Gallimaufry of Herbal Sites

A Miscellany of Marvelous Links

Beyond The Fields We Know

This summer has been a rather frantic one, culminating in the delights of a weekend spent in the beautiful countryside of Gloucestershire, at the lovely Sarah Head’s Springfield Herb Sanctuary Festival. I’ve done four or so different festivals this summer, but this one most definitely stands out as one of the most enjoyable and unique! I was invited to do a talk and have a stall at the event a good couple of months ago now, and with some trepidation I agreed – it being a 3 hour drive from my home, a long distance drive for someone who has only been driving for about a year! So, a good couple of weeks were spent nervously preparing a talk on tonic herbs, and then Friday came around and I duly got into my car and set off doggedly towards the Slaughters. Pleasantly surprised by how well I handled the drive, I finally arrived at the Sanctuary late afternoon on a blustery day, and was greeted by the most sublime view!

The sanctuary is situated on a hillside, overlooking rolling hills that are painted dark and light by the sunlight and is constantly embraced by the wind that never seemed to let up while I was there – I’ve found that the only thing more entertaining than putting up a tent in heavy wind is trying to take the blasted thing down again! After finally pitching the tent, I crawled into bed by 8pm, utterly shattered by the long drive. The following morning I stepped out of my tent to be greeted by the most phenomenal view – the field I was camped on sloped gently away to trees and fences at the bottom, bordered by beautiful and well maintained drystone walls. Beyond the field lay rolling hills and trees, rising into mist as the wind that blew ceaselessly chased away the rain clouds. The fields lay in the most gorgeous patchwork of green, gold and brown, and the trees and hedges were just beginning to don their autumn finery. The whole place felt somehow both utterly friendly and slightly feral to me, and as if a part of me breathed a huge sigh of relief once I had got there.  It felt as though the weight of history lay quite heavily on those hills, and rather than dragging the place down, it actually made it feel even more welcoming.    The herb garden, reached by following a track across the field, through a gate and down another, smaller field, was a sheer delight – it’s a real woodland garden, gently encouraged to retain its wild character, with small plantings of herbs dotted amongst the wide range of trees. A stream trickled merrily down one side of the garden, and the whole place felt as though it had taken a step sideways out of time. Sarah herself welcomed me with open arms – a lovely warm lady whose personality really infuses the sanctuary she has created and so generously shares with the world.

The festival itself was small but perfectly formed – a real little gem, where you go there not knowing anyone and come away having made a load of friends. The talks were all interesting and I found myself shaken out of the narrow thinking I had ended up in, determined to come home and experiment with loads of different herbal preparations – so watch this space, blog readers, as I suspect you will find me posting a whole stackload of different recipes and concoctions on here that I’ll be trying out over the next few months! I think Lucinda’s talk was especially wonderful for me – she talked all about the external uses of herbs, and as that is an area I had kind of got out of the habit of really thinking about, her talk was a real wake up call! I got into herbs originally through using them externally but I’ve found myself so boxed in to thinking of them in tinctures and teas and patients that it was really refreshing to listen to her talk about all the different things you can do with them outside of this. Maybe now I can get my blasted cream recipes to work out properly…

All in all – this festival was an absolute gem. I’ll be back next year, and have already pencilled the dates into my diary as it will now take precedence over anything else I get offered for that weekend. It was the last festival of the summer for me, marking the end of the busy period and the slow wind down to the autumn and winter regime, and I honestly can’t think of a better way to end the summer! 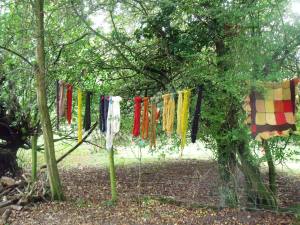