A Gallimaufry of Herbal Sites

A Miscellany of Marvelous Links

Beyond The Fields We Know

Recently the lovely Grace Nuth of Domythic Bliss and the Beautiful Necessity started a monthlong creative frenzy that she named ‘Mythic March’, and in which all were invited to participate.  Of course, me being me, I couldn’t resist and leaped right in, determined to create one new stencil design per day for the whole of the month.  Rather naive, I’m afraid, and a resolution that hasn’t actually happened, but I have created a few new stencils, redecorated the conservatory, started decorating two new pieces of furniture and finished one poem, while three more are in the beginning stages.  I thought I’d share a few of the things I have been up to here, for those of you lovely people who might be interested! 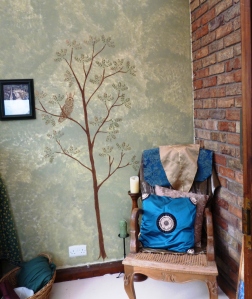 And last but not least, here is the poem I wrote.  I’m not sure it’s quite finished yet, but it has reached the stage where I have to put it away for a while and come back to it later!  Writing this has really strengthened my resolve to improve my poetry writing skills – I read gorgeous work by Theodora Goss, C S E Cooney, Terri Windling, Jane Yolen, and Rilke (to name but a few) , and I look at my work and cringe.  But not enough to make me stop writing, and not enough to make me stop sharing, because being brave enough to share my work helps me to improve my writing abilities in the long run!  If I stop sharing, and keep writing only for my own eyes, I suspect I’ll just keep it as it is because its easier to keep doing what I have been doing than it is to make an effort to change and improve!

All that aside, here is my latest offering, about the prince hunting for sleeping beauty locked in her castle.  I hope you enjoy it!

Once, garbed in hope and youthful dreams,

naïve in velvet and silk, and lace at my cuffs,

I dared your forests, the rose and bramble that

barred my path, walled you in, or so I thought.

I did my fools dance to twig snap and birdsong,

my once vaunted finery torn, as I slowly

the colours that marked me a stranger in a strange land

left on tree branches and thorns,

bargained away to the witch in her cave,

or given to the stranger by the wayside,

and I have pitched gladly down rabbit holes,

sung with blackbirds, wild and crazy.

My velvets have become moss and myth, treeish,

and I’m slowly speaking the language of plants,

reading spells in the owl’s flight, and

I’m starting to understand the passage of time,

These lessons have I learned –

how to see the jewel in a toad’s eye, and

leap with the salmon.

How to dance with foxes and sing their song while

still hearing my own.

The taste of tears like rain in all its seasons,

and callouses on my hands and feet.

The mark of corvids by my eyes,

gained by long weeks of scouring these woods for you.

And when, at long last, I

arrived at your sleeping palace, no longer a prince, but instead

you greeted me – wide awake, sunrise in your eyes – and said

‘At last, here is a fit mate

for the Queen of the Perilous Wood.’

And I realised that you were never asleep at all, never lost,

never in need of rescue.

It was always I.

2 thoughts on “Mythic March Part One”