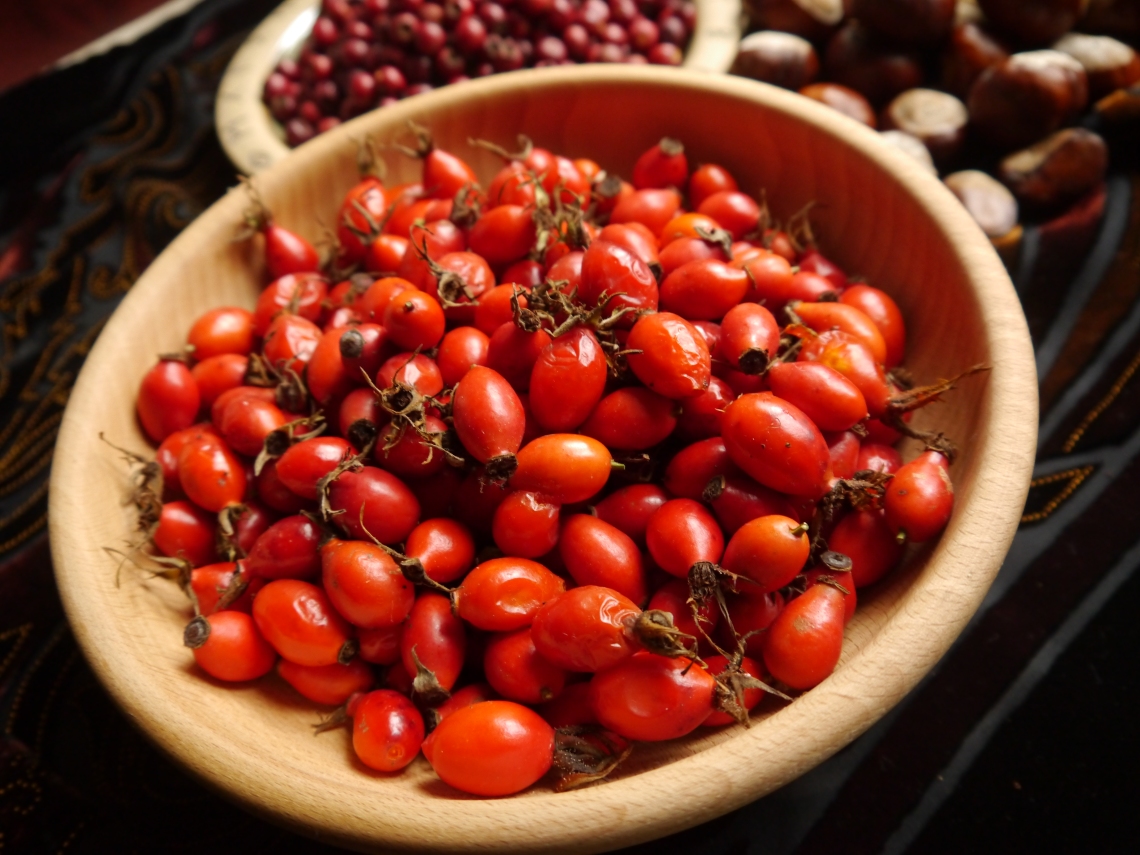 Here in the valley, the days are drawing in, sunlight has that glorious golden syrup hue to it, and the wind is becoming chillier and more playful.   Sunrises and sunsets are a thing of real beauty, and the stars are more and more visible as the days and nights go on.   November is, for me, the start of rosehip season, and a few days ago I spent a happy and rather blustery couple of hours rummaging in the hedgerows for the first rosehips nipped by frost, making them softer and much easier to cook.  Avoiding the thorns takes a certain amount of skill, especially on a windy day, but luckily enough I managed to avoid taking a mark from the roses this time and came home with a good bag full of fresh rosehips.  This time I made up a big batch of rosehip syrup with them, adding plenty of star anise, but I wanted to share a couple of other recipes I’ve used rosehips for, which are delicious, easy to make and rather good for you!

At least one pint of softened rosehips

red food colouring (or add a little beetroot to the rosehips)

Chop and simmer the rosehips (and optional beetroot for colour) in the water for half an hour until the scent pervades the room and the water has turned deep orange. Strain out the rosehips and make the quantity back up to a pint if need be. Add the sugar and the gelatine and put the whole thing back on the heat – stir it until the sugar dissolves. Bring back to a gentle boil and simmer for 25 minutes, stirring regularly. Remove it from the heat and add any other flavourings or colours you wish. Leave it for 15 minutes, and then lay a paper towel on top of the mixture to remove any foamy surface.

Pour the mixture into a baking tin and leave it for 24 hours, then mix up two parts of icing sugar with one part cornflour. Sprinkle some onto a work surface and, using a spatula or sharp knife, loosen the edges of the mixture and then peel it out of the tin. Cut it into strips and cubes, and roll each cube in the icing sugar mix. Store on layers of waxed paper. This recipe can be frozen – wrap each cube in cling film and freeze.   This makes a fairly softish Turkish Delight which has a delightfully wild flavour. 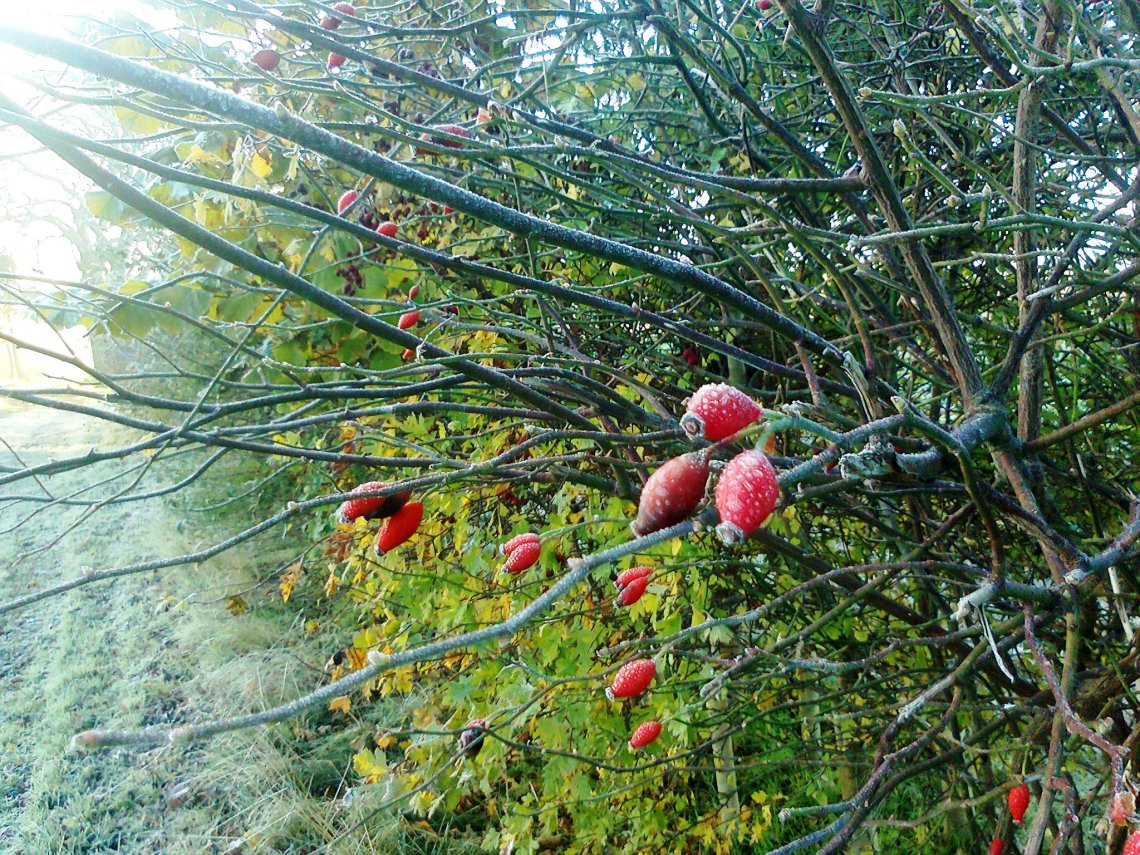 Roughly chop the rosehips if they haven’t had a good frost on them, and pile them into a saucepan with the ground star anise. Simmer it up thoroughly for half an hour, then strain out all the rosehips and herbs, making the liquid back up to a pint if need be – you can add pre made rosehip syrup for this purpose if you want. Add the sugar and stir it in thoroughly, then decant off a small amount of the mixture. Use this mixture to soak the gelatine leaves in until soft, then these leaves can be added to the syrup and whisked in. Pour the resulting concoction into a large glass bowl and put in the fridge until set.

This makes a handy and tasty pick me up for coughs and colds, very soothing for sore throats as well as really great for boosting the immune system!  I have tried this recipe with vegetarian gelatine but haven’t had much luck with it as yet.  Watch this space though, I’ll have another go and see if I can get it to work!

Lastly, I have now managed to set up a Patreon account, where I will be sharing a lot more plant photographs, recipes, tutorials and videos, on herbal stuff, mythic living, arts, crafts, and anything in between.  I’d be delighted and honoured if any of you lovely readers would consider donating $5 a month towards keeping a roof over my head and allowing me to continue creating magic!  You can find the Patreon account here.

Published by The Eldrum Tree